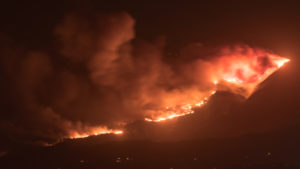 As wildfire risk has grown larger and more destructive in recent
years, especially in the drought-plagued West, AI is being employed
to assess wildfire risks more accurately. (GETTY IMAGES)

As wildfire risk has grown larger and more destructive in recent
years, especially in the drought-plagued West, AI is being employed
to assess wildfire risks more accurately and sound the alarm hours
earlier after fire breaks out.

For example, the Nature Conservancy is using controlled burning
techniques in forests in California’s Sierra Nevada susceptible
to wildfires. This summer, on a 28,000-acre plot near Lake Tahoe,
the group plans to test an AI program designed to assess how well
the thinning plan will prevent fires.

“Nothing is going to completely replace the human brain to
make decisions, but AI can help us make better decisions across a
much larger area,” stated Edward Smith, forest ecology and fire
manager at the Nature Conservancy, based in Arlington, Va., in a
recent account inThe
Wall Street Journal.

The AI program will use satellite imagery of pre- and
post-thinning work to make the assessments. This has been made
possible by the availability of small satellites taking more photos
of forests, and powerful computers needed to process the data.

Microsoftâ€™s launch in 2017 of â€œAI for Earth,â€
which allowed the general public access to AI tools that can be
used to process data from satellites as a cloud service, gave a
boost to the work. Microsoft issues some grants to help defray the
cost of the research for certain issues, including wildfire
prevention.

â€œWeâ€™re flying blind now,â€ stated Lucas Joppa,
chief environmental officer for Microsoft. â€œWe have no idea
what the state of our national forests are in the US, yet I can
point you to a coffee shop in a millisecond.â€