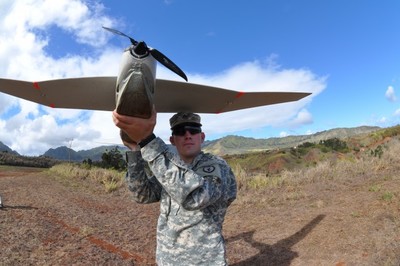 ABERDEEN PROVING GROUND, Md. — It’s no
secret the U.S. Army wants its small unmanned aerial systems to
operate quietly in densely-populated regions, but tests to achieve
this can be expensive, time-consuming and labor-intensive according
to researchers.

Smaller vehicles, like package delivery drones, for example,
donât typically fly as high as larger ones because they need to
be able to land in virtually anyone’s front yard, she said. They
also need to be quieter.

âImagine a whole fleet of these delivery drones as loud;
people aren’t going to want them in their neighborhoods,â
Costenoble said. âSo even though a small drone would produce less
noise than a full-size rotorcraft in the first place just by virtue
of being smaller and slower, there are more stringent requirements
in terms of what’s expected from it.â

Researchers imagine any number of applications where the Army
might like to deploy a small, stable, terrain-independent
platform.

âSurveillance particularly gets talked about a lot as a sUAS
application; however, if the adversary is aware that they’re being
surveilled, they might shoot the sUAS down or hide from it,â she
said.

If the sUAS sounds like 1,000 angry bees, then the adversary is
going to notice it that much sooner and more easily, she said.

âSo, this is a sound-sensitive application where the acoustic
performance is going to be important to the overall design,â she
said.

Costenoble, a doctoral candidate at University of Maryland College Park,
works with other researchers on high-fidelity computational fluid
dynamic codes, which small UAS designers can use to take acoustics
into account just as easily as they would normally account for
vehicle performance. This way, acoustics can be something, which is
fundamental to sUAS design instead of being an afterthought, she
said.

Costenoble is one of nine UMD students to earn Vertical
Flight Foundation Scholarships this year.

It is not as simple as applying existing noise models for
full-size rotorcraft to smaller ones, she said. Full-size
rotorcraft, with large rotors moving at high speeds, operate in
aerodynamic conditions where their acoustics are dominated by the
sound of the rotor blades passing the observer; however, the
smaller and slower rotors used on small UAS operate in a different
aerodynamic regime, where acoustics are dominated by the noise
created by the blades passing through and disturbing the air around
them. Because this noise occurs across a range of medium and high
frequencies, it is referred to as broadband noise.

âTo take broadband noise into account during the small UAS
design process, we use semi-empirical models,â she said. âThose
models were developed over 30 years ago for a particular airfoil,
and so may need to be updated to account for the physics of
different airfoil shapes.â

âThe parameters of the boundary layer flow are not available
in prior literature for most airfoils, and cannot necessarily be
obtained from simplified aerodynamics methods,â Costenoble said.
âThe goal of this work is to develop a method of obtaining the
parameters of the airfoil boundary layer from an existing
high-fidelity computational fluid dynamics code, without requiring
any more effort from the codeâs end-user than was required
previously.â

The goal of her work is to develop a method of obtaining the
parameters of the airfoil boundary layer from an existing
high-fidelity computational fluid dynamics code, without requiring
any more effort from the codeâs end-user than was required
previously, she said.

Without this methodology, researchers would obtain this kind of
information from wind tunnel tests, âbut those are expensive and
time-consuming. It would also have been possible to use existing
CFD codes, but would have required labor-intensive post-processing
of the codeâs output,â Costenoble said.

This project is part of a research program at the laboratory to
address UAS platform design and control challenges. Researchers
said they are looking for enabling capabilities to advance Army
missions in the multi-domain operations.

âInterdependence of various research areas requires a
comprehensive approach to develop solutions that improve a number
of desired attributes in UASâ such performance, maneuverability
and noise simultaneously,â said Dr. Rajneesh Singh,
lead for Vehicle Integrated Analysis at the laboratory.

Reducing noise emission without compromising on the UAS flight
range or endurance has been âa hard problem for the S&T
community,â Singh said, but this collaborative project gets the
Army closer to addressing it.

Researchers discuss this work in a paper, Computation
and Extraction of Boundary Layer Parameters from Numerical
Simulations for Use in Rotor Acoustics Models, representing
collaborative work with the University of Maryland, College
Park.