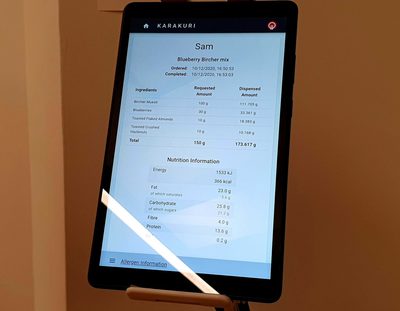 “Will it be serving you chips?” my husband asks when I tell
him I am going to have brunch with a robot, a joke which, I point
out, has not been funny since 1976. If ever.My Sifted colleagues,
meanwhile, were wondering if we were going to have âDalek
breadâ. But no, my brunch with the Karakuri DK One food-making
robot arm, is in fact a bowl of muesli.

Itâs a bowl of muesli and coconut yoghurt, with a helping of
mixed berries on top, to be precise. Before it starts making the
food, I can specify exactly how many grams I want of each thing.
Then the robot arm â the first automated canteen for making meals
â  whizzes around an enclosure the size of a small walk-in
wardrobe taking the bowl to the different slots that will dispense
the yoghurt, the muesli mix and the berries, before placing the
bowl back in a small cubicle with a sliding door from which I can
retrieve it.

Created by the three-year-old London-based startup Karakuri, the
robot might be the closest we have got, so far, to the dream of a
machine that makes you a tailored meal at the press of a few
buttons. Like the Nutrimatic Drinks Dispenser in the Hitchhikerâs
Guide to the Galaxy. Only hopefully more successful.

Though the winter dusk is deepening outside, the machine is
making us brunch. Bowls and bowls of yoghurty muesli in different
combinations that we can specify on a touch screen display that is
connected to the machine.  Equally it could be making us bowls of
dim sum, or poke, or salad â the components and ingredients
inside the machine can be changed to suit the menu, hot or cold.
But breakfast bowls are a simple thing for the prototype to
practice on.

Karakuri unveiled the prototype machine in December, along with
a Â£6.3m investment, led by firstminute capital, and supported by
Hoxton Ventures, Taylor Brothers, Ocado Group and the UKâs
government-backed Future Fund.

It is easy to get mesmerised by the moving robot arm, but this,
points out Barney Wragg, Karakuriâs cofounder and CEO, is not the
clever part of the system. The arm is a pretty standard piece of
equipment that you can see in industrial production lines all over
the world.  The clever part is an array of sensors, motors and AI
behind the scenes.

âYou can get robot arms to mix and serve food. But the really
difficult part in the food industry is serving exactly the right
portions, weighing and measuring and dispensing them,â says
Wragg.

The machines made by rival robot-kitchen company Moley Robotics,
for example,  he says, still needs a human to present it with all
the ingredients of the meal in the right weights and quantities.
This preparation and serving part is the bit that Karakuri wants to
solve, in order to make robot catering a truly useful and scalable
proposition.

Prototypes for the clever innards of the DK One are littered
around Karakuriâs spacious office-and-workshop space in
Hammersmith. There is a machine that squeezes yoghurt through a
plastic tube in a peristaltic motion, exactly the way your gut
moves food through. Wragg and his team have calibrated exactly how
much yoghurt comes out at each squeeze, but also they have had to
make sure that the parts of the machine that come into contact with
the yoghurt â e.g the stainless steel pot in which it is stirred
â are easy to remove and wash in a standard dishwasher. There is
no point in building a labour-saving machine that takes hours to
clean afterwards.

Another type of dispenser, for nuts and berries, works a little
like the penny falls machines at an amusement arcade, gently
shaking the contents so that they fall in precise quantities onto
the serving bowl. There are sensors and scales that measure how
much has already been dispensed and adjusts the shaking â more
vigorous to start with and tapering off as the bowl fills â so
that you get just the right amount.

In another corner, a robot arm that is being taught how to
identify varying bits of grilled chicken, pick them up and place
them in another dish. This is the mundane reality of AI. Newspaper
headlines suggest it is going to take over the world. Right now it
is being taught the work of a junior at a chicken shop.

An automated canteen could be a useful solution for a
pandemic-scarred world where people are wary of human contact. The
DK-One can serve somewhere between 60-100 bowls of food an hour to
customers without the need for any customer-facing serving staff.
Wragg says there is interest for the machine from large restaurant
chains, big catering companies that serve hospitals, schools and
work canteens, as well as from supermarkets.

The interest from supermarkets is possibly the most intriguing.
Supermarkets are increasingly getting into the meal kit game â
Morrisonâs has operated its Eat Fresh meal kit business since
2018 and Waitrose had plans
to buy Mindful Chef earlier this year. A meal-making machine
would potentially make the meal-kit business more scalable,
although Wragg has nothing specific to announce at the moment.
Karakuri does have a relationship with Ocado, though,  which owns a
minority stake in the startup.

At least as important as the touch-free food service is the
portion control the machine can give. Restaurants work on
razor-thin margins with protein being one of their biggest costs.
Accidentally give every customer a sliver too much chicken and you
can easily wipe out your profits, Wragg explains.

This was what originally led him to found Karakuri. âI had a
couple of friends with restaurants and I was stunned at how little
data there was in the trade. I saw a restaurant as something of a
food manufacturing plant, and manufacturing is all about data and
controls. There is typically nothing like that in a
kitchen.â

Getting accurate data on ingredient usage  â more than any
labour savings â is the biggest selling point for customers, says
Wragg.

âItâs a known secret of the restaurant business that there
is a problem with portioning and wastage.â

One potential customer, for example, wants a solution that would
dole out bowls of biryani, a mix of rice and meat cooked together,
so that there are at least four but no more than six pieces of meat
in each portion. Doing that requires a mix of shaking machines to
serve out the food and machine vision to spot the number of meat
pieces.

Wragg â who has a varied background that includes both working
at Arm, the microchip architecture designer and for many years at
Andrew Lloyd Webberâs Really Useful Group â  founded the
company at the end of 2017 and raised the first Â£7.2m seed round
in April 2019. A further round in December has allowed them to
complete work on the first prototype. Karakuri has now raised a
total of Â£13.5m in funding.

The team has grown from 13 people this time last year, to nearly
30. Wragg expects the company to grow to around 50 people within
the next two years.

Covid has had a mixed impact on the business. On the one hand,
with the restaurant trade in severe distress, there are fewer
customers willing to take a risk on something as experimental as a
robot kitchen. On the other hand, it has made many bigger companies
aware of the need to automate their businesses. Selling to bigger
companies takes longer, but Wragg is hoping to have the first
installations this year.

The first DK-One was supposed to be installed in the Ocado staff
canteen as a test run, but with only a skeleton staff working
physically at the offices because of Covid restrictions, it
didnât seem worth doing. Instead Sifted is getting this
demonstration in the Karakuri workshop. Despite the machine
producing a prodigious number of breakfast bowls, nobody is
actually allowed to eat anything because it would violate various
food safety regulations (and also, after seeing the yoghurt
squeezing through the intestine-like tubes it has started to seem
less appetising).

Instead we make do with black coffee from the modest capsule
coffee machine in the corner of the office. Thatâs a catering
machine that was invented
some 36 years ago, initially for the professional, specialist
market, but which has subsequently become ubiquitous and changed
our coffee habits for good. Wragg can only hope that the
Karakuriâs machines will have anything like the same impact.