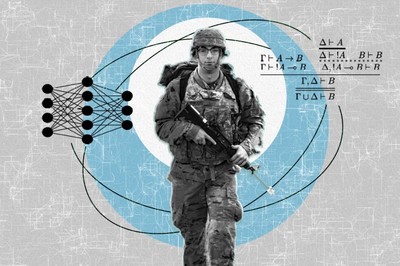 The overall effort, worked in collaboration with the University of California, Los
Angeles and Cardiff
University, and funded by the laboratoryâs Distributed
Analytics and Information Science International Technology
Alliances, addresses the challenge of sharing relevant knowledge
between coalition partners about complex events using
neuro-symbolic artificial intelligence.

This new neuro-symbolic architecture enables injection of human
knowledge through symbolic rules (i.e. tellability), while
leveraging the power of deep learning to discriminate between the
different primitive activities.

This is accomplished following a neuro-symbolic architecture
where the lower layer is composed of neural networks that are
connected through a logical layer to form the complex event
classification decision, Kaplan said. The symbolic layer
incorporates known rules that enable learning the lower layers
without having to train labeled data for the primitive
activities.

Two different approaches have been developed to enable learning
at the neural layers by propagating gradients through the logic
layer.

The first, Neuroplex, uses a neural surrogate for the symbolic
layer. Second, DeepProbCEP, uses DeepProbLog to propagate the
gradients.

Neuroplex was evaluated against pure deep learning methods over
three types of complex events formed by a sequence of images, a
sequence of sound clips and a nursing activity data set collected
from motion capture, meditag and accelerometer sensors.

The experiments and evaluation showed that Neuroplex is capable
of learning to efficiently and effectively detect complex events,
which cannot be handled by state-of-the-art neural network
models.

During the training, Neuroplex not only reduced data annotation
requirements by one hundred times, but also significantly sped up
the learning process for complex event detection by four times.

âThis research demonstrates the potential for
neuro-symbolic artificial intelligence architecture to learn how to
distinguish complex events with limited training samples,â Kaplan
said. âFurthermore, it is demonstrated that the systems can learn
primitive activities without the need for annotations of the simple
activities.â

In practice, he said, the initial layers of the neuro-symbolic
are pre-trained, but the amount of data to collect and label can be
greatly reduced, lowering costs.

In addition, the neuro-symbolic architecture can leverage the
symbolic rules to update the neural layers using a small set of
labeled complex activities in situations where the raw data
distribution has changed. For example, in the field it is raining,
but the neural network models were trained over data collected in
sunny weather.

âThis means the AI system can naturally provide explanations
of its recommendations in a human understandable form,â Kaplan
said. âUltimately, this will enable better trust and coordination
with the AI agent and human decision makers.â

The symbolic layer also enables tellability. In other words, he
said, the decision maker can define and update the rules that
connect primitive activities to complex events, both at the
initialization stage, where a perception module is untrained, as
well as during the fine-tuning stage, where a perception module is
a pre-trained off-the-shelf model and needs to be fine-tuned to a
specific environment.

âThis research is able to leverage the advancements
in deep learning and symbolic reasoning,â Kaplan said. âThe
dimensionality of the sensor data whether it is time-series data
(e.g., accelerometers) or video is infeasible for pure symbolic
reasoning. Similarly, deep learning is unable to learn patterns
that manifest over large time and spatial scales inherent in
complex events. The hybrid of neuro-symbolic learning is necessary
for complex event processing.â

The research directly supports the Army Priority Research Area
of artificial intelligence by increasing speed and agility in which
we respond to emerging threats, Kaplan said. Specifically, the
research is focused on AI for detecting and classifying complex
events using limited training data to adapt to changing
environments and learn emerging events.

The work also supports network command, control, communications
and intelligence by engendering trust between AI and human agents
representing different coalition partners by the AI incorporating
symbolic explanations and the human agents using symbolic rules to
guide the reasoning of the AI, he said.

âComplex event processing is difficult, and the
research is still in its infancy,â Kaplan said. âNevertheless,
we have made great advancements over the last two years to develop
the neuro-symbolic framework. The research still needs to consider
more relevant data sets, and there are still other questions to
answer regarding the human-machine interface. In the long term, I
am confident that a neuro-symbolic AI will be available to Soldiers
to provide superior situational awareness than the available to the
adversary.â

This research was recently presented at the virtual International Conference on Logic
Programming, and will be featured during the upcoming ACM Conference on Embedded Networked
Sensor Systems, or SenSys 2020, scheduled virtually for Nov.
16-19.