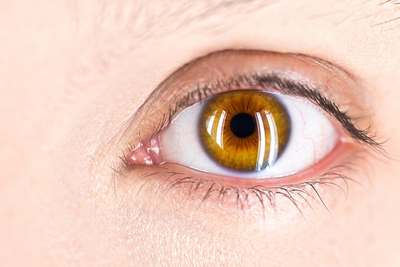 CORVALLIS, Ore. – Researchers at Oregon State University are
making key advances with a new type of optical sensor that more
closely mimics the human eye’s ability to perceive changes in its
visual field.

The sensor is a major breakthrough for fields such as image
recognition, robotics and artificial intelligence.Findings by
OSU College of Engineering researcher John Labram and graduate
student Cinthya Trujillo Herrera were published today in Applied
Physics Letters.

Previous attempts to build a human-eye type of device, called a
retinomorphic sensor, have relied on software or complex hardware,
said Labram, assistant professor of electrical engineering and
computer science. But the new sensorâs operation is part of its
fundamental design, using ultrathin layers of perovskite
semiconductors â widely studied in recent years for their solar
energy potential â that change from strong electrical insulators
to strong conductors when placed in light.

âYou can think of it as a single pixel doing something that
would currently require a microprocessor,â said Labram, who is
leading the research effort with support from the National Science
Foundation.

The new sensor could be a perfect match for the neuromorphic
computers that will power the next generation of artificial
intelligence in applications like self-driving cars, robotics and
advanced image recognition, Labram said. Unlike traditional
computers, which process information sequentially as a series of
instructions, neuromorphic computers are designed to emulate the
human brainâs massively parallel networks.

âPeople have tried to replicate this in hardware and have been
reasonably successful,â Labram said. âHowever, even though the
algorithms and architecture designed to process information are
becoming more and more like a human brain, the information these
systems receive is still decidedly designed for traditional
computers.â

A spectacularly complex organ, the eye contains around 100
million photoreceptors. However, the optic nerve only has 1 million
connections to the brain. This means that a significant amount of
preprocessing and dynamic compression must take place in the retina
before the image can be transmitted.

As it turns out, our sense of vision is particularly well
adapted to detect moving objects and is comparatively âless
interestedâ in static images, Labram said. Thus, our optical
circuitry gives priority to signals from photoreceptors detecting a
change in light intensity â you can demonstrate this yourself by
staring at a fixed point until objects in your peripheral vision
start to disappear, a phenomenon known as the Troxler effect.

Conventional sensing technologies, like the chips found in
digital cameras and smartphones, are better suited to sequential
processing, Labram said. Images are scanned across a
two-dimensional array of sensors, pixel by pixel, at a set
frequency. Each sensor generates a signal with an amplitude that
varies directly with the intensity of the light it receives,
meaning a static image will result in a more or less constant
output voltage from the sensor.

By contrast, the retinomorphic sensor stays relatively quiet
under static conditions. It registers a short, sharp signal when it
senses a change in illumination, then quickly reverts to its
baseline state. This behavior is owed to the unique photoelectric
properties of a class of semiconductors known as perovskites, which
have shown great promise as next-generation, low-cost solar cell
materials.

In Labramâs retinomorphic sensor, the perovskite is applied in
ultrathin layers, just a few hundred nanometers thick, and
functions essentially as a capacitor that varies its capacitance
under illumination. A capacitor stores energy in an electrical
field.

âThe way we test it is, basically, we leave it in the dark for
a second, then we turn the lights on and just leave them on,â he
said. âAs soon as the light goes on, you get this big voltage
spike, then the voltage quickly decays, even though the intensity
of the light is constant. And thatâs what we want.â

Although Labramâs lab currently can test only one sensor at a
time, his team measured a number of  devices and developed a
numerical model to replicate their behavior, arriving at what
Labram deems âa good matchâ between theory and experiment.

This enabled the team to simulate an array of retinomorphic
sensors to predict how a retinomorphic video camera would respond
to input stimulus.

âWe can convert video to a set of light intensities and then
put that into our simulation,â Labram said. âRegions where a
higher-voltage output is predicted from the sensor light up, while
the lower-voltage regions remain dark. If the camera is relatively
static, you can clearly see all the things that are moving respond
strongly. This stays reasonably true to the paradigm of optical
sensing in mammals.â

A simulation using footage of a baseball practice demonstrates
the expected results: Players in the infield show up as clearly
visible, bright moving objects. Relatively static objects â the
baseball diamond, the bleachers, even the outfielders â fade into
darkness.

An even more striking simulation shows a bird flying into view,
then all but disappearing as it stops at an invisible bird feeder.
The bird reappears as it takes off. The feeder, set swaying,
becomes visible only as it starts to move.

âThe good thing is that, with this simulation, we can input
any video into one of these arrays and process that information in
essentially the same way the human eye would,â Labram said.
âFor example, you can imagine these sensors being used by a robot
tracking the motion of objects. Anything static in its field of
view would not elicit a response, however a moving object would be
registering a high voltage. This would tell the robot immediately
where the object was, without any complex image processing.â

About the OSU College of Engineering: The
10th largest engineering program based on undergraduate enrollment,
the college received nearly $60 million in sponsored research
awards in the 2019-20 fiscal year and is global leader
in health-related engineering, artificial intelligence, robotics,
advanced manufacturing, clean water and energy, materials science,
computing and resilient infrastructure. The college ranks second
nationally among land grant universities and third among the
nationâs 94 public R1 universities for percentage of tenured or
tenure-track faculty who are women.