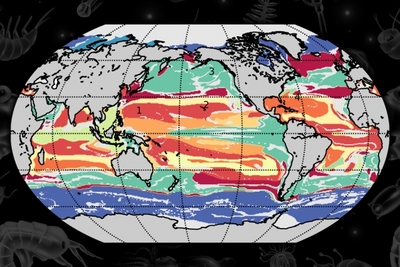 Image: Courtesy of the researchers, edited by MIT News.

A machine-learning technique developed at MIT combs through
global ocean data to find commonalities between marine locations,
based on interactions between phytoplankton species. Using this
approach, researchers have determined that the ocean can be split
into over 100 types of “provinces,” and 12 “megaprovinces,”
that are distinct in their ecological makeup.

An MIT-developed technique could aid in tracking the ocean’s
health and productivity.

On land, it’s fairly obvious where one ecological region ends
and another begins, for instance at the boundary between a desert
and savanna. In the ocean, much of life is microscopic and far more
mobile, making it challenging for scientists to map the boundaries
between ecologically distinct marine regions.

One way scientists delineate marine communities is through
satellite images of chlorophyll, the green pigment produced by
phytoplankton. Chlorophyll concentrations can indicate how rich or
productive the underlying ecosystem might be in one region versus
another. But chlorophyll maps can only give an idea of the total
amount of life that might be present in a given region. Two regions
with the same concentration of chlorophyll may in fact host very
different combinations of plant and animal life.

“It’s like if you were to look at all the regions on land
that don’t have a lot of biomass, that would include Antarctica
and the Sahara, even though they have completely different
ecological assemblages,” says Maike Sonnewald, a former postdoc
in MIT’s Department of Earth, Atmospheric and Planetary
Sciences.

Now Sonnewald and her colleagues at MIT have developed an
unsupervised machine-learning technique that automatically combs
through a highly complicated set of global ocean data to find
commonalities between marine locations, based on their ratios and
interactions between multiple phytoplankton species. With their
technique, the researchers found that the ocean can be split into
over 100 types of “provinces” that are distinct in their
ecological makeup. Any given location in the ocean would
conceivably fit into one of these 100 ecological provinces.

The researchers then looked for similarities between these 100
provinces, ultimately grouping them into 12 more general
categories. From these â€œmegaprovinces,â€ they were able to
see that, while some had the same total amount of life within a
region, they had very different community structures, or balances
of animal and plant species. Sonnewald says capturing these
ecological subtleties is essential to tracking the oceanâ€™s
health and productivity.

â€œEcosystems are changing with climate change, and the
community structure needs to be monitored to understand knock on
effects on fisheries and the oceanâ€™s capacity to draw down
carbon dioxide,â€ Sonnewald says. â€œWe can’t fully
understand these vital dynamics with conventional methods, that to
date donâ€™t include the ecology thatâ€™s there. But our
method, combined with satellite data and other tools, could offer
important progress.â€