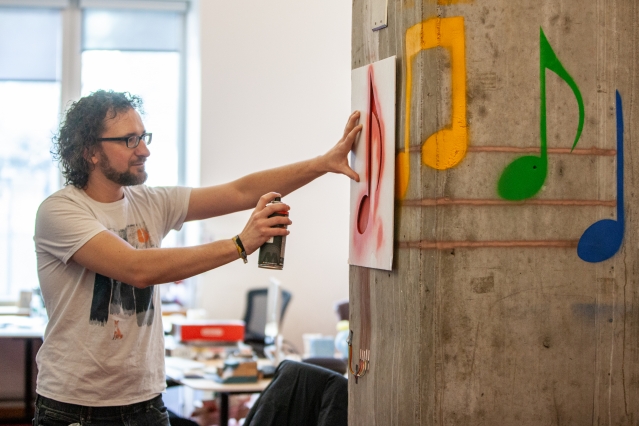 For decades researchers have envisioned a world where digital
user interfaces are seamlessly integrated with the physical
environment, until the two are virtually indistinguishable from one
another.

This vision, though, is held up by a few boundaries. First,
it’s difficult to integrate sensors and display elements into our
tangible world due to various design constraints. Second, most
methods to do so are limited to smaller scales, bound by the size
of the fabricating device.

Recently, a group of researchers from MIT’s Computer Science
and Artificial Intelligence Laboratory (CSAIL) came up with
SprayableTech, a system that lets users create room-sized
interactive surfaces with sensors and displays. The system, which
uses airbrushing of functional inks, enables various displays, like
interactive sofas with embedded sensors to control your television,
and sensors for adjusting lighting and temperature through your
walls.

SprayableTech lets users channel their inner Picassos: After
designing your interactive artwork in the 3D editor, it
automatically generates stencils for airbrushing the layout onto a
surface. Once they’ve created the stencils from cardboard, a user
can then add sensors to the desired surface, whether it’s a sofa,
a wall, or even a building, to control various appliances like your
lamp or television. (An alternate option to stenciling is
projecting them digitally.)